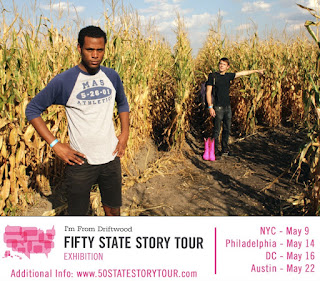 Nathan Manske is the founder of the digital storytelling platform, I’m From Driftwood, which is for and by the LGBTQ+ community. Manske launched the site in March of 2009 with the goal of helping queer youth in small towns to realize that they were not alone. I’m From Driftwood has spent the last decade producing, curating, and publishing first-person stories of lesbian, gay, bisexual, transgender and queer people of diverse backgrounds. What began a handful of video stories has bloomed into an archive of more than 1,000 narratives from New York City to the Hawaiian Islands that has received over 18 million YouTube views from more than 70,000 subscribers.

I’m From Driftwood isn’t just about helping individuals better understand themselves and others, it’s about preserving a sense a community across a broad LGBTQ+ spectrum. The topics of the stories reflect the entire “queer” experience from same-gender loving, coming of age, parenting, race, homeless youth, and gender nonconformity.

I’m From Driftwood is also a nonprofit organization, having gained it’s 501C3 status in 2011, with Manske serving as Executive Director. Typically, there’s an annual summer fundraiser, but to celebrate I’m From Driftwood’s 10 year anniversary, Manske decided to hold a gala on March 27, 2019, honoring notable I’m From Driftwood storytellers such as former Houston Mayor and current Victory Fund President and CEO Annise Parker; singer-songwriter David Raleigh; and, AIDS activist Cecilia Gentili. What’s more, the nation’s online LGBTQ+ story archive is gearing up for a 50-StateStory Tour Exhibition in four U.S. cities this May. These free events, which highlight photos, artifacts, stories and personal experiences the team had collecting LGBTQ+ stories from all 50 states, are part of a series of celebrations marking the organization’s 10th anniversary.

The world has changed drastically since Manske began collecting stories in 2009. The military policy Don't Ask, Don't Tell is gone; the Supreme Court repealed California’s Prop 8 and the federal Defense of Marriage Act making way for marriage equality. But at the same time, there is currently a ban on trans service people,  renewed threats from anti-LGBTQ religious freedom bills, and escalating hate crimes. Over the course of 10 years, Manske has learned what really shakes people to their core and affects people on a deep level is the commonality between everyone—love, loss, and resilience. The stories on I’m From Driftwood are meant to move people to take action in their own lives and their communities, including coming out, advocating for LGBTQ+ people, and supporting LGBTQ+ elders and youth. Here Manske expounds on the archive’s evolution:

How did the iconic gay rights pioneer Harvey Milk serve as the catalyst for launching I’m From Driftwood?

I saw a photograph of Harvey Milk riding on the hood of a car (at the 1978 San Francisco Gay Freedom Day Parade) and holding a sign that read “I’m from Woodmere, NY" that just really connected with me, because Harvey Milk (the first openly gay elected official in this country) isn't from San Francisco—this big gay mecca. He's from this town that most people have never heard of. I was living in New York at the time, but I'm not from New York. I'm from a small town called Driftwood, Texas (current population 144 people). That message of “you're not alone” really hit me hard, because it would've meant so much to me as a gay kid growing up in Driftwood. So, I wanted to get that message out there in an effective way, and I thought that storytelling would be the best way to do that. At first, it was going to be a book, it wasn't even going to be a website. When we launched the site, it was all written stories. About six weeks into it, a friend who lives in Philadelphia had this idea of filming people telling their stories. Now the video stories have become the focus.

What was life like growing up in Driftwood, Texas?

I have three brothers. I grew up on a ranch in Texas; our morning chore was to go get the eggs from the chicken coop and feed the goats, and that whole ranch lifestyle, so I didn't have much exposure to cultures that were different from mine. We grew up on 40 acres and it was beautiful and wonderful, but in terms of exposure to queer culture, there was none really. It would've been very helpful to have some stories and examples of what a queer life looked like. I finally came out when I was 18, or I went on my first date with a boy when I was 18. It was one of those things where I've always sort of known (I was gay) but didn't do anything about it until I was 18.

You left a career in advertising to follow your life’s passion?

I got an advertising degree from the University of Texas and moved to New York, working as a copywriter. I wrote ads for four years. I was going through a very common crisis in advertising, which is, we're spending all this time and effort working away on these ads to sell these products that no one really needs or cares about. What am I doing with my life? This was in 2008, when Barack Obama was running for president. I was very active, volunteering for his campaign, knocking on doors. I had this fire in me. I wanted to help create change. Obama won the presidency, but Prop 8 passed, which overturned marriage equality in California. I was really upset about that. It was a couple of months later that I saw the film Milk on a Wednesday night, and thought of the storytelling idea that Thursday morning. On Friday when I went into my job, I was laid off. All of a sudden, to be living on unemployment and credit cards with all these student loans, but still, I had a purpose. It made all the difference in the world. I just put everything I had, dumping all of my savings into this project. I launched the site a few months after losing my job; I have never looked back.

How do you identify, find people to share their personal stories?

It's very organic, and we like to keep it that way. Sometimes I'll meet someone at a networking event or even a bar. I’ll tell them about I'm From Driftwood and ask them if they want to share a story. Other times, I’ll work with organizations, nonprofits, and ask for potential storytellers. Another way is working with different companies, so, they'll send us some of their queer employees to share their stories. Also, our organization hosts fundraisers and social events, where we’ll encourage the people who attend to share stories with us.

How did the 50-State Story Tour come about?

We were filming stories mostly in New York and Philadelphia. (But) the purpose of I'm From Driftwood is that you're not alone, no matter where you are or what you're going through. That's where the idea for a 50-state story tour came from. Back in 2010, with the help of one of my best friends (now an I'm From Driftwood board member), Marquise Lee, my brother Nick, we embarked on a four-month, 50-state tour to collect stories and film narratives from LGBTQ+ people in the smallest towns and the biggest cities across the country. It was an incredible, amazing experience. We pored over more than 10,000 photos and artifacts, recorded 30 hours of audio with an oral historian, and now we want to share our once-in-a-lifetime journey by doing pop-up exhibits in Washington, DC, New York City, Philadelphia, and Austin, Texas during the month of May.

What can we expect to see in the pop-up exhibit?

It will be a display of artifacts, stories, and hundreds of photos from that tour in pop-up exhibits. One example of an artifact is a pair of cowboy boots I bought from a thrift store and spray painted hot pink that was used at a fundraiser for people to put cash (donations) inside instead of a glass jar or bucket. In every single state of the tour, we took a photo of the pink boots in front of a landmark. One day I hope those pink boots will be archived the same as Dorothy’s ruby slippers (from the classic MGM movie The Wizard of Oz).

What’s your long-term goal, where do you see I’m From Driftwood in another 10 years?

Our goal from the beginning was to share stories from people of every age, race, gender, identity, and culture to increase empathy, deepen understanding of LGBTQ+ experiences, and empower individuals to live authentically. My ultimate goal is to become a global multimedia storytelling organization. I want to collect stories from all over the world, not just in the US. I want to share first-person LGBTQ+ stories in as many ways as possible. I want to do podcasts, graphic novels, and theater productions—any way that people consume media.

Now at age 38, if you had the chance to sort of sit down and talk to your 18-year-old self, what would you say?

I would say just keep going. Go faster and go harder. Anytime you are wondering or feeling shy or sitting on the fence, just jump. Everything will work out... You'll figure it out. Trust yourself and just Go. Go. Go. Go. So, if you think it, do it… don't waste any time. 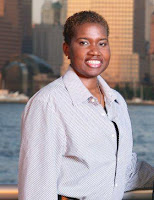 Written by Carolyn M. Brown, a journalist, author, playwright, producer, and founder of True Colors Project, a social enterprise that produces two annual events: My True Colors Excel Pride Awards and My True ColorsFestival, a multidisciplinary arts festival for and by LGBTQIAGNC+ storytellers. She is a member of the nglccNY Media and Communications Committee. @cmbrown_7