We’re extremely happy to announce that Michael Venturiello has been named nglccNY’s Ambassador of the Month for November. Michael is a local historian, writer, educator, and New York City tour guide. He is the founder of Christopher Street Tours, an LGBTQ owned and operated walking tour company that focuses solely on LGBTQ history. 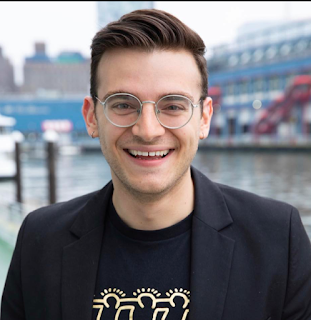 "When I first joined nglccNY, I was a brand new entrepreneur with lots of questions and little business experience,” he said. “At my very first M3, I immediately found a community of other entrepreneurs and other LGBTQ businesses. Since then, I refer to nglccNY as my LGBTQ business family. nglccNY has given me so much: a community, mentors, friends, and lots of advice on how to grow my business. I'm so grateful to the Chamber for everything it's provided for me!”

Michael says he became an Ambassador “to give back to the LGBTQ business community.” He added:  “I was so grateful for my own Ambassador and for other Chamber friends who connecting me with other members. I wanted to do that for other people. I see my role as an Ambassador as a connector. Seeing the spark between businesses and business leaders is incredibly rewarding for me. It's also great to welcome new members into the community and make them feel included."

Phyllis Mehalakes, Chair of The Ambassadors Committee praised Michael’s contributions to the chamber saying: “When I asked Michael to join the Ambassador Committee I knew he would be a great fit for our team.  Always engaging and generous with his time, Michael is unfailingly responsive to the needs of new members assigned to him.  He’s professional, dependable, and goes the extra mile for those who have questions or need assistance.  I’m delighted that Michael is a part of our Ambassador Committee and continues to make such positive contributions to nglccNY.”

Michael has been featured as one of FindSpark’s “Top LGBTQ+ Influencers & Thought Leaders Transforming the Workplace Through Innovation and Impact.” He was also included in Eventbrite’s “Five to Follow: LGBTQIA+ Event Organizers in NYC for Pride and Beyond.” He has been featured on PrideOut.Com, Metrosource magazine, and Attitude magazine. Michael is also a valued member of nglccNY’s Media & Communications Committee and regularly volunteers his time writing feature articles on our members.

Congratulations, Michael! We are immensely grateful for your service!