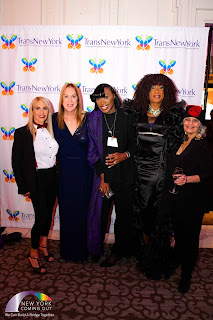 Dr. Gennifer (Genn) Herley, PhD, describes herself as a proud transgender woman who transitioned a year and a half ago at which point she decided to pay it forward by bringing awareness to the issues facing members of the transgender and non-conforming (TGNC) community and offering guidance to individuals and their loved ones in an open and safe environment. To that end she created TransNewYork, a not-for-profit 501C3 organization that serves as an information center, providing advocacy and support services for the TGNC community.

Prior to founding and serving as executive director of TransNewYork, Dr. Herley  ran A Better Life Counseling for seven years, earning her doctorate degree in 2014. TransNewYork offers individual and group counseling as well as monthly meetings that address such issues as gender dysphoria and encourages transgender, non-binary, and non-conforming individuals to share their personal stories. The organization also offers corporate training, helping employers to better understand gender identity in the workplace and to recognize gender biases.

“We wish to be an informative source for transgender resources, activities, and events,” say Dr. Herley. “We have assembled an inspirational itinerary of supportive professionals who (address) a broad range of topics fitting the needs of our community.”

While Dr. Herley acknowledges there have been other events throughout the city catering to the TGNC community, New York Coming Out differed in scale and scope. “Most of the conferences I attended were outside of New York and they were expansive,” explains Dr. Herely, who says she finds that many transgender people are still in the closet. “Conferences like these offer not only a safe space but also an experience that people in the transgender and gender non-conforming community would not get elsewhere. For some people it is a once a year event or once in their lifetime.”

She credits NGLCC for the overwhelming support for the New York Coming Out Conference in its maiden year. It all started at the NglccNY’s 10th anniversary gala reception which celebrated the organization as the premier LGBT business network in New York City, with over 500 members, and as the regional office of the National LGBT Chamber of Commerce.

The event took place on October 9, 2018 at Tribeca 360. There she was greeted with a room full of LGBTQ professionals. It was the first public event Dr. Herley attended since coming out. There she met NCLCC Co-Founder and President Justin Nelson, who personally invited her to attend the national dinner in Washington, DC. It was at that event she made an lasting connection with NglccNY member William Self of Northwell Health, who has been responsible for shepherding trans related health initiatives at New York State's largest healthcare provider and private employer.

“That was a key moment,” said Dr. Herley. “When I was thinking about coming out, I was so frightened that I would lose my entire family, my entire group of friends,” she explains. While that did not happen, she did come to the realization that even in the event that it did happen, “there was this whole other family waiting for me and that was the NGLCC. I have so much gratitude.” 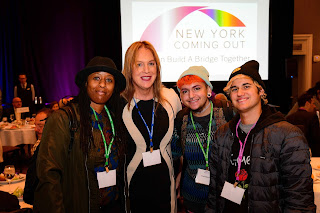 “Events of this kind are important in providing a forum for addressing social justice topics and issues that are impacting marginalized communities,” said Ingrid Galvez, nglccNY’s Diversity & Inclusion Committee Chair. “It is important that we make room, make space and honor everyone within our community. We need to be informed. Our community is under attack all the time,” she adds, pointing to the current atmosphere of hate and violence across the country. “People are creating this otherness as it relates to the trans community. It is everyone’s responsibility to hold each other up.”

Galvez adds that she was pleased that the New York Coming Out conference had a good representation of people of color in the room, noting that 22 trans people having been killed this year in acts of senseless violence. “As a community we need to do a better job. We need people of privilege who are in positions of power to not just be allies but to become activists,” said Galvez, who also is the co-founder of Thorp, a company that specializes in business strategies and movement consulting. “We not only need a voice, we also need to have some authority to change the narrative.”

In 2018, 26 trans people were killed, most of them trans women of color, reports the Human Rights Campaign (HRC). At least 22 trans or gender nonconforming women of color have been murdered in the United States as of November 2019. HRC says “at least” because too often these stories go unreported or misreported.

Each year, the month of November is held in special reverence for transgender and gender nonconforming communities. Between November 13 – 19, people and organizations around the country participate in Transgender Awareness Week to help raise the visibility of transgender people and to address issues members of the community face. The date November 20 marks the annual observance of the Transgender Day of Remembrance which honors the memory of the transgender people whose lives were lost in acts of anti-transgender violence.

“Trans Awareness Week and the Transgender Day of RemembranceTrans are incredibly important moments. I also believe we should uplift trans lives every day, not just during November," Galvez said”

Written by Carolyn M. Brown, a journalist, author, playwright, producer, and founder of True Colors Project, a social enterprise that produces two annual events: My True Colors Excel Pride Awards and My True ColorsFestival, a multidisciplinary arts festival for and by LGBTQIAGNC+ storytellers. She is a member of the nglccNY Media and Communications Committee. @cmbrown_7